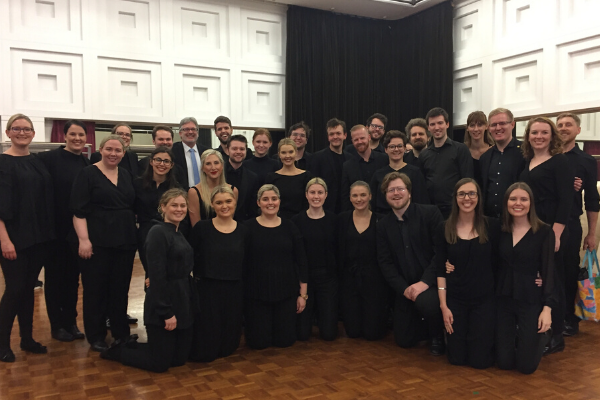 Voices of Birralee’s goal is to provide meaningful opportunities for its choristers, and many of these in the past have included our choirs participating in events with historical significance to Australia.

Particularly over the past five years, we’ve given great focus to Australia’s involvement in World War One, but in October, we were grateful to gain insight, through music, into another historic event of devastating loss, and one that is rarely spoken about.

Thanks to soprano and composer Deborah Cheetham, the buried stories of the Eumeralla Wars, were brought to the top of mind through the moving composition, Eumeralla, a War Requiem for Peace.

Our young adult choir, Resonance of Birralee was invited to sing in this piece, which told of Australia’s shared history with Indigenous people, telling the story of resistance, conflict and loss.

The Eumeralla Wars were the violent encounters between European settlers and Gunditjmara aboriginals in south west Victoria. It was a battle fought over 23 years and silenced since the last shots were fired 170 years ago.

We spoke with some of the Resonance of Birralee choristers to find out what they thought about the experience, which involved Yorta Yorta Soprano Deborah Cheetham AO, Gungarri Baritone Don Bemrose and Mezzo Soprano Talia Garrett-Benson as soloists, with UQ Symphony Orchestra, UQ Chorale and Dhungala Children’s Choir.

Chorister, Luke Krause said learning from Deborah, who spoke at the choir’s first rehearsal, and through subsequent personal research about the Eumeralla Wars, had been lifechanging.

“Deborah told of her visit to Gunditjmara Country in 2013 at the Lake Condah Camp in Victoria, and of looking out at a row of trees close to the creek there and feeling an unnerving sense of horror rising within her. She sensed that something calamitous had occurred in that bushland; that something was not at rest among the trees,” Luke said.

“Deborah then learned of the Eumeralla Wars which were fought on that land, and of the thousands of Gunditjimara people and settlers who were killed in the conflict. Unlike other significant battles, in the 170 years since the ceasefire, no peace treaty had been brokered between the parties, nor have any memorials been erected to commemorate the dead.

“It made me realise the great suffering endured by many Indigenous Australians following colonisation, the impugning of their ancient culture and traditions, the loss of their country, and the lasting deleterious effects this has had until the present day.”

Fellow chorister, Kerry Pickering said she was fortunate to be a part of this moving performance.

“Written entirely in Indigenous Gunditjmara language, it tells the confronting story of the dispossession and massacre of Indigenous peoples over 170 years ago, in particular, the resistance wars in what is now south west Victoria. It brought tears just reading the translation,” she said.

“The piece is an epic 70-minute performance, which tested us both musically and physically.  But the emotional impact, for me at least, was huge. The events depicted in Eumeralla are a part of Australian history that cannot continue to be ignored or glossed over.”

Kerry said when Deborah addressed them at rehearsals, she spoke graciously.

“She welcomed us all to share in the storytelling of the piece, which although confronting, is part of our shared history and an important step towards healing the divide in our nation that has been present since colonisation. This is an experience that will stay with me forever, one of the many I have been fortunate to have in my six years with Resonance of Birralee,” she said.

For Steph Williams, she felt privileged to perform in Eumeralla alongside Deborah.

“The way she shares our history with such empathy is inspiring and has certainly motivated me to actively learn more about our Australian history; the history that has been denied to us,” she said.

“This is the most relevant and important performance Resonance has been involved in to date as we were singing about our history while contributing to the healing that must occur in order for us to move toward understanding.”

Chorister Julia Vedelago noted that Eumeralla was a challenging, but rewarding piece, which offered a unique perspective, as most of the time, “history is written by the victor”.

“We were so lucky to be singing the truth… The whole work has such haunting power, it’s impossible not to feel something when you sing or hear it,” she said.

In talking about Eumeralla for Australian Music Centre, Deborah noted about the piece:

“Eumeralla was written in recognition of one of the most brutal resistance wars fought on this continent and is designed for non-Indigenous choirs to perform alongside Indigenous musicians. It is my hope that this war requiem will help the spirits of those who fell – those who resisted and their aggressors, to find lasting peace and that we, their descendants, might find our way to a deeper understanding of the legacy of these battles.”

Eumeralla, a War Requiem for Peace, premiered with Melbourne Symphony Orchestra early this year, with more information about Deborah and her journey in this story by the Sydney Morning Herald.

Stay up to date with Voices of Birralee’s news and events via www.birralee.org