Welcome to the Armistice Centenary Choir blog! We can’t wait to provide you a daily recap of the goings on of our tour this week from now until after the Centenary of the First World War Armistice this Sunday.

It all began Sunday afternoon with our choristers, Conductor Julie Christiansen OAM, Assistant Conductor Jenny Moon, and many accompanying people, meeting in Paris, some having enjoyed a short holiday prior, with others arriving on a red-eye direct from Brisbane.

The group united for a rehearsal to revise the many songs to be performed for the week, before a group dinner at the accommodation.

With leisure time scheduled for the evening, some of our choristers checked out a quirky underground jazz club, Le Caveau De La Huchette, stopping at an Aussie bar on the way, with some settling for an early night.

Monday marked the first official day of tour, beginning with a morning rehearsal to lock in the repertoire, before exploring the sights of Paris. 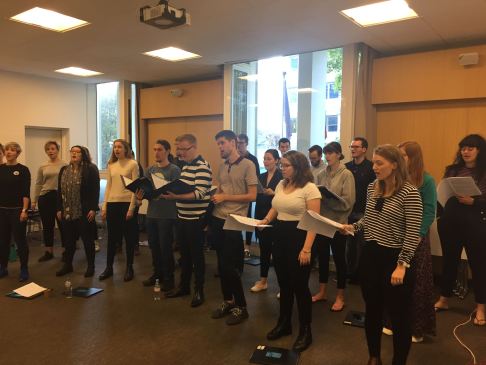 It was a beautiful almost ‘t-shirt weather’ kind of day (a contrast to the chilly European weather in recent weeks). Stops included a gallery of lighting installations, Atelier des Lumieres, seeing the massive Eiffel Tower under blue skies, climbing 300 steps to relish in the expansive views from the top of the Sacré–Cœur basilica, or simply finding a good coffee shop to keep the caffeine cravings at bay.

In the afternoon, the group met for the first performance of tour – singing under the l’Arc de Triomphe as part of the Ravivage de la Flamme ceremony. This rekindling of the flame ceremony is held every night to honour an unkown French soldier who gave his life during WW1, while being a meaningful ceremony of war remembrance.

L’Arc de Triomphe is looking a little different to usual, with tiered seating both on the inner side of the busy round-a-bout and on the outer in the lead up to Sunday’s Armistice Day. It was still impressive and great to see the Armistice commemorations will take place far and wide.

We sang a few warm up songs before the service began, with three songs, For the Fallen, Hymne à la Nuit, and the French National Anthem sang during the official proceedings.

The French veterans seemed very appreciative of our involvement and we were honoured to play a part, especially during this incredible week of world remembrance. A special moment was when one of the spokespeople told the crowd of Australia’s experience of fighting in Northern France during World War One and our country’s allegiance with France. 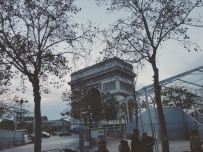 Isabelle with her mum Renata.

After the ceremony, choristers enjoyed dinner, with some watching the Eiffel Tower light show. Many tried to get an early night with Tuesday set to be a big day which will include the choir appropriately visiting the Armistice Museum in Compiegne, Vimy Ridge and other memorials.

The choir is looking forward to then arriving in Bailleul for the first community concert.

A special thank you to Tony Forbes for his videos and the choristers for contributing to this blog.