It was poignant the final concert of the tour would be for the people of Villers-Bretonneux. But first, the day began with rehearsals at the Australian National Memorial. 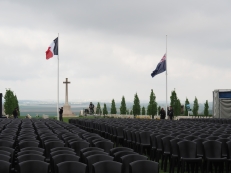 Chairs ready for the Dawn Service (Pic by Brian) 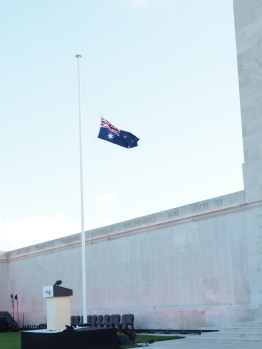 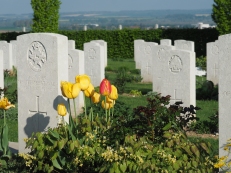 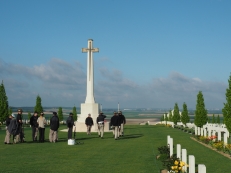 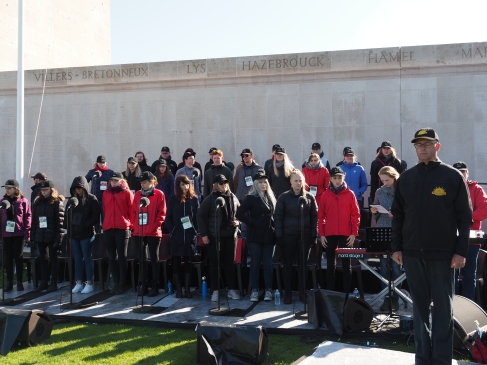 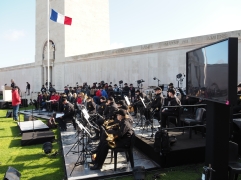 Kate and Paul (pic by Brian) 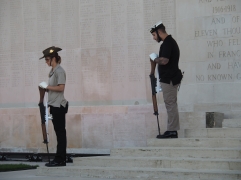 Rugged up and ready for cold (pic by Brian)

Overnight the temperature dropped approximately 10 degrees and the wind picked up. It made for a very cold start as the choristers sat in the shade of the monument awaiting the sun.

“Today we were shivering, instead of sweating, during our rehearsals at ANM! The warmth of spring disappeared, the wind picked up and the temperature dropped to create a chilly morning on the Western Front. We could not help but realise this was a taste of what is to come on Anzac Day morning,” chorister Meg Ingram said.

“Many choristers began formulating plans for choice of layers of clothing to wear during the Dawn Service given today’s windy and cold conditions. It did however solidify our purpose in remembrance of our Aussie soldiers who would have battled similar conditions 100 years ago on this same terrain,” chorister Georgia Davey said.

After the rehearsal the group visited the Musee Franco-Australien in Villers-Bretonneux, with some of the choristers who had visited in 2016, noticing the beautiful renovations since.

A beautiful poem in the Franco Australian Museum (pic by Kerry) 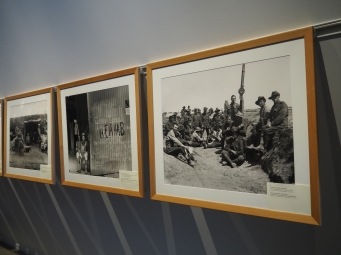 At the Franco Australian Museum (pic by Brian)

Uniforms from WW1 at the Franco Australian Museum (pic by Brian)

The museum demonstrates the strong friendship between Australia and Villers-Bretonneux through displays of personal effects and letters which have all been donated to the museum.

The choristers then got ready for the evening’s concert, for the town of Villers-Bretonneux, with many marking it a highlight so far, with chorister Kate Holley noting she felt the locals’ appreciation for the Australians.

“Seeing all the students’ Australian-inspired artwork on the walls and hearing them sing along with us to Waltzing Matilda in the performance, made me realise how much this appreciation for Australia is ingrained into their culture and education. I couldn’t help but smile. It made me want to give my best performance to show my appreciation for the beautiful people of Villers-Bretonneux and thank them for making me feel so at home,” she said. 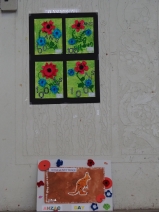 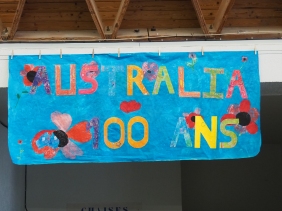 Meg Ingram noted: “The reception of the town to our presence and music was incredibly appreciative. I think it has been my favourite concert so far, because of the overwhelming feeling of happiness that was sustained for me through the whole night. The feeling you get from singing in Villers-Bretonneux as an Australian, is a precious experience.”

The choir singing at the Covered Market, Villers-Bretonneux (pic by Brian)

Performing to the people of Villers-Bretonneux (pic by Brian) 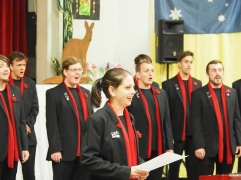 “Tonight’s concert was also the last gig of the tour (apart from Anzac Day), so for a lot of us it was quite emotional, myself included. I think I had tears in my eyes for half the concert. I’m going to miss singing with this group. We’ve gelled really well and sound great, everyone is so happy and we just love it. This past week has gone far to fast,” chorister Chris Wood said.

“The concert in the covered market was spectacular as ever- seeing the kids singing along with waltzing Matilda was super special,” Fergus Harte said.

A huge thank you to everyone who made this concert possible, including Villers-Bretonneux Mayor Patrick Simon and Deputy Mayor Benoit Decottegnie and Lorraine El Yabouri from Franco-Australian Museum as well as the entire Villers-Bretonneux community.

Meg, Chris, Kate and Adaya with some of the local Villers-Bretonneux kids (pic from Chris)

While the past week has been a great deal of fun, with a number of emotional moments, it has never been too far from the choristers’ minds why they are here and the horrific events that took place in this part of the world 100 years ago.

“As I come closer to the day I find myself thinking about all the men who came over here. There were all roughly my age and that is what hits the hardest. When I sing on the 25th I sing for them, my great grandfather and nothing could make more proud of being an Australian than those heroic soldiers,” chorister Phillip Suschinsky said.

One of the choristers, and a keen observer of history Andrew Messenger notes his experience and thoughts surrounding this centenary, along with why he believes the memories of war and sacrifice should be kept alive.

“I’m a member of the first generation in history never to be asked to kill by my government. We have records for “war” dating back to 1457 BC in Egypt, and organised murder has been a consistent feature of human civilisation ever since. Perhaps even one of the defining features. And along with the blood, pain and fire we have produced unit histories, individual memoirs; memory.

“Why do we remember war? What is the value of lingering on pain and horror, on the worst of our behaviour? I do not think it is because war occasionally, rarely unleashes the better angels of our otherwise immiserated nature.

“In this tour I’ve been actually angry only once. In the 20s, the French built a memorial at the site of the humiliating ceasefire they forced the Germans to sign. It shows a French bird stabbing a German eagle. Triumph! We win! The site was later used by the Nazis to humiliate the children born of such empty hubris.

“The British memory of the Great War is dominated by July 1 on the Somme, a day of tragedy and defeat in which they lost sixty thousands of men killed or wounded. The Thiepval museum has an entire room filled with nothing but last letters to parents. A Corporal writes “My one great hope is that I may prove brave in the midst of all the horror which my comrades describe so dramatically”. The next day he jumped off and was immediately hit; his war ended within a few seconds of its starting. Was there time for bravery?

“What about the sacrifice of Lt. A.R. Allan, 10th Battalion Australian Infantry? His parents had ‘dulce et decorum est pro patria mori” inscribed on his gravestone in Ballieu – but was there really anything sweet and seemly about dying at age 22? What about Henry Gunther, a 23 year old American who proved his valour charging headlong at a German MG position on November 11 – they begged him to stop, but were forced to fire. It was 10:59. Another eleven thousand men were pointlessly killed that day, after the terms of the war had been decided, because their commanders wanted the nice number thing.

“But I think the people of Villiers-Bretonneaux have the best approach. Australians captured the town from the Germans in 1918, then rebuilt it in the 1920s, and they will never forget. They teach their children Waltzing Matilda in school, and hang Australian flags from light poles.

“I’ve never sat in a dank trench under fire; I’m not one of the wounded, dying, blind or insane war must always produce. That’s a really big deal for me. Let’s keep the lights on all around the world. Let’s light them where they remain dark. And let’s remember what happens when arrogance or cowardice or lack of charity leads us to fail.”

The countdown is on for Anzac Day!