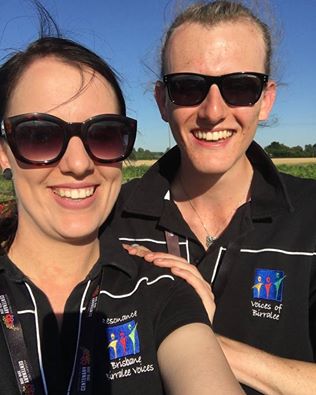 First of all, a big thank you to everyone who is supporting us from home. This has been a life-changing trip for our choristers and we’re humbled for so many people to be following our journey back in Australia!

Day 6 included our choristers performing at two very moving ceremonies. For those watching from home, you would have seen how beautifully sunny it was, and that beauty brought extreme heat!

….but when you think about what it would have been like for our Anzacs 100 years ago – a bit of heat isn’t bad at all!

Our choristers were tasked with performing at the Pheasant Wood Cemetery and VC Corner services.

And what an atmosphere! Everyone, including the crowds at both events, were focused on the common goal of honouring our fallen! 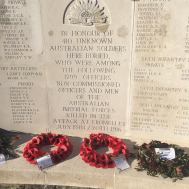 During the day, the choristers showed a real team effort – they shared jokes, some tears, and got through the day knowing we were surrounded by friends to support us! Perhaps we were channeling just a little bit of how the Aussies got through all those years ago.

The speeches and prayers throughout the services were thoughtful tributes to those that will forever remain young, with the crowds watching on with such respect.

It was constantly noted how the Battle of Fromelles was the darkest day in Australia’s military history.

By way of example, of the 887 officers and men from the 60th battalion who went into battle on 19 July, 1916, only one officer and 106 men answered the roll call the following afternoon.

The battle had intended to stop the Germans from heading south to the Somme, however, it was a failed and devastating result, and across the 24 hours, 5,533 Australian and 1,400 British troops were casualties (further reading here).

Lieutenant Ronald McInnis, 53rd Battalion, summed up the horrific day in his diary on 19 July 1916, which was referenced in the Pheasant Wood service:

“We thought we knew something of the horrors of war, but we were mere recruits, and have had our full education in one day.” (Quoted in Bill Gammage, The Broken Years, 1990, p175, referenced here)

We wondered if there should be a Fromelles Remembrance Day every year in Australia to remember this darkest day in our country’s history – another day to give thanks to those that serve, both past and present.

Between waiting to sing, we listened to some great speeches acknowledging the wonderful, brave young men who now rest in the gentle care of the French people to which we, as Australians, are extremely grateful.

And on the French side, they will be forever grateful for Australia’s effort, in a land so far away from home.

At the Pheasant Wood service, a poignant moment displaying this gratitude, was when Jean-Marc Todeschini, State Secretary to the Minister of Defence, noted how the Australian troops were “distinguished by their absence of fear and their bravery”.

“We owe it to the Australian people who offered their children during the first and second World War to liberate Europe.

“…History reminds us that even if our two nations are 150,000 kms apart, their destiny is united.

“…May we also cherish for many, many years to come, the long-lasting alliance between our two countries.

The choir sang beautifully at both services, as wonderful ambassadors for Voices of Birralee and Australia, adding so much to this significant day through what they do best – singing.

Those watching at home were able to see quite a few images of the choir singing, with In Flanders Fields ringing loud and clear at the start of the Pheasant Wood wreath laying ceremony.

Chorister Joshua Clifford performed a stunning solo at the beginning of this piece, as the rest of the choristers joined in, providing a haunting, yet incredibly moving sound.

Overall, it was an exceptional day, and it isn’t the end for us…

Tomorrow (Day 7) we will say goodbye to Lille and Fromelles as we head off to Amiens for the final stage of our centenary commemorations tour.

We’ll be preparing for Saturday’s service in Pozieres, in the Somme, to commemorate the 100th anniversary of the Battle of Pozieres.

If you missed any of the Fromelle’s services, these can be viewed on ABC iView.

One thought on “Day 6: The tragic 24 hours in our history”