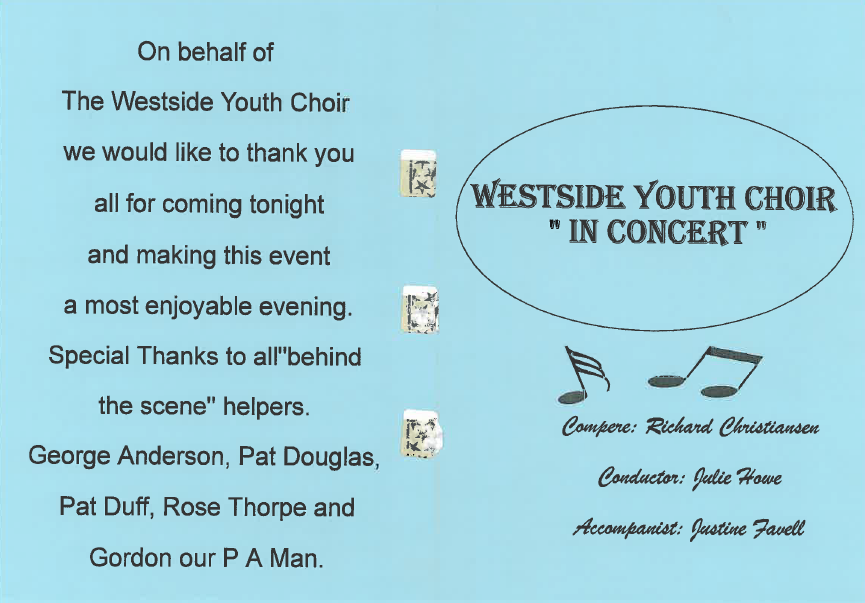 This year means a lot for Voices of Birralee – and to kick off the celebrations, we’d like to share a brief snapshot of our history, with more musings to come as we get closer to our official 20-year celebration in November!

(…And that’s a reminder to grab your tickets for the concert on Sunday 1 November here).

Julie Christiansen (nee Howe) decided to form Westside Youth Choir as part of The Ashgrove / The Gap Rotary Club Youth Project to perform a Christmas Concert. This concert was so successful in encouraging incredible participation from the community, that it was continued.

The first official concert for this newly formed choral group, was held on 9 June 1995 with senior and junior choirs performing. We still have this milestone first flyer:

Our organisation has stood the test of time and we’re proud that the same three people who were involved in this first concert are still integral to the Voices of Birralee program today:

Where are they now?

80 members signed on in 1995 (flash forward to 2015 and we have 349 and are still growing!) while the year was highlighted by another significant event – Julie and Richard married on 21 October.

The next five years, bringing us up to the year 2000, was a wonderful period of growth and it became necessary to explore new directions for the choir. We decided to change the name to better position the organisation in the Queensland and Australian choral community. We also wanted the name to acknowledge the traditional owners – Birralee is from an aboriginal dialect meaning ‘children’.

On 8 March the name was officially changed and became incorporated as Brisbane Birralee Voices (this is still the name of our signature children’s choir).

2003 saw the formation of the Birralee Blokes, a dynamic ensemble of young men aged 13 – 25 whose love for singing and communicating good music has fascinated and captivated audiences around Australia.

Two years later, in 2005 we celebrated the 10th anniversary of Brisbane Birralee Voices at QPAC. It was a fantastic achievement and we knew we were equipped for many years to come!

In 2006, Julie’s dedication for serving the community through music, particularly the development of children’s and youth choirs was acknowledged in a wonderful way. Julie was awarded the Medal of the Order of Australia (OAM).

In the same year there were great celebrations as The Birralee Blokes were led to victory by Paul Holley in a nation wide competition and were announced the ABC Classic FM Choir of the Year, Youth Choir of the Year and winner of the Listeners Choice Award. The wheels of fine music making were well and truly in motion as our youth became adults and inevitably a young adult ensemble was formed, Resonance of Birralee under the leadership of Paul. This choral ensemble involved (and still involves) young people aged 18-30 years collectively bringing a wealth of experience, enthusiasm and musical leadership to the Voices of Birralee programme.

With the introduction of three signature ensembles, Brisbane Birralee Voices Inc. was officially renamed on 29 October, 2008 and became Voices of Birralee Inc. Another successful application followed and the organisation was placed on the Australian Register of Cultural Organisations with DGR tax deductibility status.

Resonance of Birralee has achieved significant state, national and international success since its inception. Having had many opportunities to perform at a variety of prestigious events, the ensemble’s high caliber was further recognised in 2014. The ensemble was successful in a nation wide bid to provide its extraordinary standard of music to the Anzac commemoration ceremonies in France from April 2015.

The significance of being appointed by the Australian government for the Anzac commemorations on the Western Front for five years is an achievement, which humbles all who have been involved, and reminds us of what an amazing 20 year journey it has been.

Voices of Birralee continues to be one of Australia’s foremost youth arts organisations focused on pursuing artistic excellence in a nurturing and joyful environment with members achieving artistic and personal development through self-discovery and self-expression.

We celebrate this in 2015 with the 20th anniversary of Voices of Birralee and thank everyone who has been part of the journey.